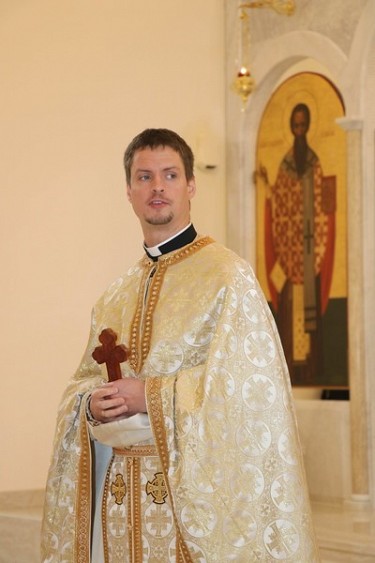 FATHER WILLIAM was born in 1982, in Louisville, Kentucky. He was raised in the Episcopal Church, and was received into the Orthodox Church by Chrismation at the Assumption Greek Orthodox Church in Louisville, Kentucky, in December of 2005. As a youth he enjoyed the sports of Powerlifting and Wrestling. In his teenage and young adult years, he captured a Kentucky State Championship in Wrestling (2000), as well as two National Powerlifting Championships (1999, 2001), and broke five National and American records in the Deadlift. Throughout this time, Fr. William abandoned the faith of his youth and spent five years alternating between agnosticism and atheism. In January of 2004, an injury forced an early end to his athletic endeavors. At this time, Fr. William was blessed to encounter Christ, through the study of philosophy and history, in the Orthodox Church. Forced by circumstance to abandon the hobbies he loved, he found renewed strength in the practice of the Orthodox Faith.

Fr. William received his BA in History in 2004 from Transylvania University in Lexington, Kentucky, where he minored in Classical Studies. In 2022, he returned to Transy to serve as the Adjunct Instructor of History and Classics, teaching History of Byzantium. He received his MA in History from the University of Louisville in 2007, where his thesis Kingdom of God: The Exercise of Imperial Power during the Fourth-Century Trinitarian Controversy within the Context of Eusebian Political Philosophy was accepted at his defense. During this time Fr. William became reaqcuainted with his wife. They had met in 2001, while they were both attending Transylvania University in Lexington, but it would take several more years before they were called back together. Also at this time, Fr. William began to seriously discern a call to the holy priesthood on a mission trip to Alaska. In January 2010 he received the blessing of His Eminence, Metropolitan NICHOLAS, to attend seminary. From 2010-2014 he attended Holy Cross Greek Orthodox School of Theology, graduating magna cum laude in May of 2014. Fr. William and Elizabeth were married in June of 2013, after which she joined him in Boston for his final year of seminary.

In October of 2014, Fr. William was ordained to the Diaconate, and was given the opportunity to serve as a deacon in his home parish of Louisville, Kentucky for a month. In November of 2014, Fr. William was ordained to the Priesthood. Both of his ordinations came by the hands of Metropolitan NICHOLAS of Detroit. Fr William served as the Assistant Priest at Holy Trinity-St. Nicholas Greek Orthodox Church in Cincinnati, Ohio from 2014 to 2017, under the direction of Frs. Bill Cassis and Mark Emroll. On August 1st, 2017, he was assigned as the Presiding Priest of Holy Mother Queen of All Greek Orthodox Church, by the authority of Metropolitan NICHOLAS.

Fr. William firmly believes that the spread of the Gospel is the duty of every Orthodox Christian, and he considers himself blessed to be called by the Church to spread the light of Orthodoxy throughout his native Kentucky. From the outset of his tenure in Kentucky, Fr. William made Outreach and Evangelism, as well as Catechism, priorities of his ministry. Since 2017, through prayer and the tireless evangelistic efforts of the people of Christ's flock, the church has welcomed almost 50 converts to the Orthodox Faith. The parish has also embraced a growing cycle of weekly worship, with liturgical services on Wednesday, Friday, and Saturday, in addition to the Sunday liturgy. After these services, there are multiple opportunities year-round for ongoing Christian education and sacramental participation. In April of 2018, Fr. William and Presvytera Elizabeth were blessed with the birth of a daughter, Teresa (Tessa) Redmon. In September of 2021, they welcomed their son Thorin into the world.

In his spare time, Fr. William enjoys reading works of history, philosophy, theology, fiction, poetry, and drama, from the Classical to Medieval eras, as well as modern works of fantasy and alternate history. He has a particular affinity for Ancient Greek history and philosophy, as well as Middle English poetic and theological works. He also enjoys walking with his wife and children, working on his lawn and garden, caring for the fish in his aquarium and pond, and cooking for his family. Father and Presvytera still have trouble believing that they have found their way, through a long and winding road, back to the city in which they met so many years ago in college, but they plan to make the most of their ministry together for as long as they are blessed to exercise it in Lexington. They continue to thank God for all of the blessings He has bestowed on them through the Omophorion of the Holy Metropolis of Detroit, the arch-pastoral ministry of His Eminence, Metropolitan NICHOLAS, and through the welcoming spirit of the people of Lexington, Kentucky.

Holy Mother Queen of All GOC